The last quarterly favorites recap of 2019!

to see how the rest of the year went! 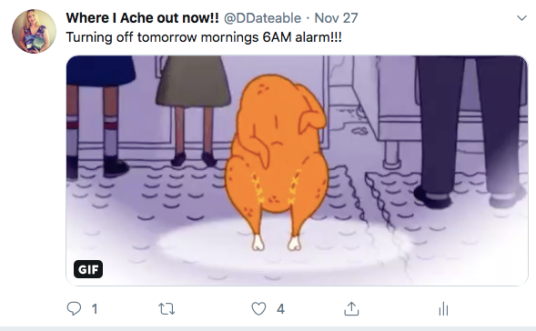 All I Want For Christmas is You – Mariah Carey

Grandma Got Ran Over by a Reindeer – Elmo & Patsy

Every 3 months this year I’m going to review some favorite things that have been going on in my life. It will be fun to see how things progress and change as the year goes by!

2. Favorite tweet: Check out who I said would be a good trivia partner

3. Favorite blog post: Was when I announced my next Poetry Collection!!!

4. Favorite phase /word to say: I recently started watching Letterkenny on Hulu and they frequently say “Pitter Patter let’s get at’er” so I’ve been parroting that a lot. More Letterkenny quotes here Letterkenny Sayings. (I got to the second season but stopped watching the show, it’s an acquired taste for sure).

5. Favorite thing you did: I went on a trip to California with my boyfriend! It was great to experience something new together and see him so happy and energetic! We also learned I’m a very hangry person… ( sorry for being moody)

6. Favorite artist: I’ve been in some stressful moods due to school work and listening to Post Malone always helps.

7. Favorite Poem: Your Loss is one I recently published on the blog even though I wrote it back circa 2011. I’ve really been enjoying going through my old poems and seeing which ones are still holding up with time. This one is short but still holds substance, Take a look!

So I was watching Bachelor in Paradise Monday night and could not stop shaking my head at Izzy. Izzy and Vinny hit it off right away and seemed like a very solid couple. A few weeks go by and a guy finally comes to Paradise peeking Izzy’s interest. Izzy just has to talk to Brett to see if he’s worth the risk of letting go of her strong connection to Vinny. Vinny, not wanting to wait around on the Backburner, leaves Paradise.

Some more time goes by, Brett goes on a date with someone else and then tells Izzy that they just don’t have a strong enough connection. Izzy then departs from Paradise, realizing the mistake she made by letting Vinny go and tries to win him back via phone call. He shuts her down quickly, making the right decision in my opinion.

I met my own Vinny, my own Mr. Right. He was a great guy, treated me really well, and I would be a fool to let that go. But I did anyway.

I did it for the potential of Stubborn. Or maybe because Izzy and I have a lot in common and we did it because we didn’t want to end up ruining a great thing and getting left heartbroken. There’s a 75% chance that my Brett will go on a date with someone else that will end up outweighing my connection with him. But I guess that’s where my similarities with Izzy end.

I wouldn’t go back to Mr. Right. If one man was all it took for me to question my relationship enough to let it go then eventually, another man will come along giving me that same desire to risk it again. I think Izzy feared being alone more than she loved Vinny. I think Vinny realized that too and he wasn’t going to settle for someone who doesn’t truly love him.

I’m not going to settle and I don’t think Mr. Right should either.